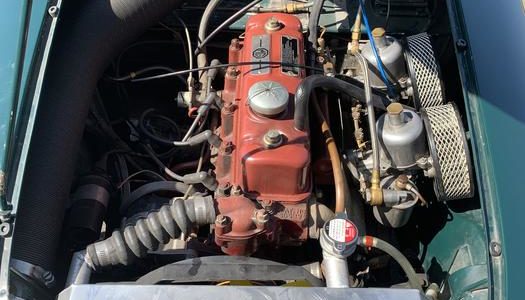 -A very dear friend of mine ‘ passed’ at the end of last year, and in his estate was a 1957 MGA which was willed to his daughter—She has ‘realized’ that this ‘legacy’ from her father is not something that she can ‘appreciate’ as much as her Dad did and has asked me to help her to pass it on to a ‘kindred-spirit’ in the MG community…..Her Father was a ‘fanatic’ for authenticity—-He had to be—-A Designer and builder of all the ‘aircraft-sets’ for films such as “Independence Day”, “Escape From LA”, “White House Down” etc., —Just look at his web site which is still up—-Producersairforce.com….So when he bought t​he “A”, it’s restoration to as close to originality was of significant importance:…”But’, and that is the operative word here; it must be dependable and ‘road-worthy’, not the ubiquitous “Do-Not-Touch” garage queen or the trailer-to-show type of car…His logic: A car was made to be driven….And that is exactly what he intended to do…. and did….Just as the previous like minded owner did when, after his ‘due-diligence’ search, found a well recommended professional whom he commissioned for the restoration with all the necessary reliability and safety built in…Alloy radiator, rear-view-mirrors on the windshield stanchions , upgraded to alternator, new harness with positive ground, new marine grade plywood floors, rebuilt engine for leaded fuel, aircraft type of seat-belts, new leather interior, canvas top and toneau cover, etc., etc.,…Everything done to the car was documented from the “strip-down-to-the-raw-chassis” to its rebuild up to the finished product…Everything over this two year rebuild process it all recorded and documented with correspondence and photographs between the owner and the shop….This substantial and all important file is now a part of the car and its history…..Even though the “A” never appeared in the “BRG” paint scheme offered by MG that was what he wanted….’the-customer-is-always-right’, and as Chuck so eloquently put it “….they damn well should have offered BRG….”

The car has just 3200 miles since restoration….Runs and drives like a dream….Turns those pedestrian heads everywhere…The thumbs-up by other drivers are automatic….As noted above it is a very dependable and road-worthy driver…..Car is located in my hangar at Whiteman Airport in North Los Angeles County CA…..I can be reached at 818-805-8099

Asking $27,000 but Tiffany has mentioned to me that all ‘sensible’ offers will all be considered